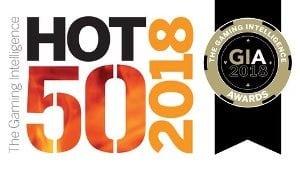 The great and the good of the iGaming industry were out in force recently at the 2018 Gaming Intelligence Awards (GIA). Designed to recognise excellence across the casino, poker, bingo and sports betting sectors, the ceremony was a glittering affair for all. Sweeping the board and proving it’s still one of the top operators in the business was The Stars Group. Also winning multiple accolades was Scientific Games and Playtech as the GIA panel looked to honour ongoing innovation.

In assessing this year’s nominees, the judges wanted to see more than new product releases. Following another year of mergers and acquisitions, “legacy systems” simply wouldn’t cut it this time around. With evolution and forward-thinking two of the main qualities GIA’s team were looking for, it was those companies that embraced the industry’s changing dynamics that thrived during the February ceremony.

Poker Operator of the Year: PokerStars

Clinching both the Poker and Casino Operator of the Year awards was PokerStars. As it’s done multiple times in the past, PokerStars’ continued to grow under despite a general downturn in the online poker industry. As well as holding 74% of the total global market share, PokerStars NJ made headway in the US market. For moving ahead of an established US brand such as Caesars Interactive, the judges were more than willing to give PokerStars this year’s poker award.

Casino Operator of the Year: PokerStars

In winning the casino award, PokerStars commended for its rapid rise to prominence both in the UK and beyond. In addition to launching platforms in Denmark, Portugal, the Czech Republic and Bulgaria, the Stars Group platform has started building its own games. Using its financial power, the company has sought to augment its third-party products with unique creations such as Stars Mega Spin and Millionaire Island. Having the ability to do this after just three years as a casino operator has not only helped PokerStars pick up an award, but it’s made it one to watch for the future.

One to Watch: VideoSlots

Taking a gaming format that appeared unsuccessful and making it work isn’t easy, but VideoSlots managed it in 2017. After trialling its player vs. player Battle of Slots game in late 2015, the company tweaked the product and saw activity boom in recent months. By the close of last year, gross gaming revenue increased by 300% thanks, in part, to Battle of Slots.

Although the player vs. player format doesn’t directly provide VideoSlots with a profit, the company was able to capitalise on its popularity. This, in turn, has lead to strong performances across its entire portfolio of products. Based on this impressive growth, this once niche brand has quickly become one to watch in 2018.

Marketing Campaign of the Year: LeoVegas

Marketing may be one of the toughest things to get right in the iGaming world, but LeoVegas found the perfect formula in 2017. Through its partnership with Swedish search engine Hitta.se, the betting brand caught the eyes of the judges through its integration techniques. In the first instance, any Hitta search that yielded zero results presented the user with the LeoVegas logo.

On top of this, any sporting venue viewed using the engine’s map feature was marked with the same logo. Finally, when a live sporting event was shown, live odds from LeoVegas sport were also displayed. The end result was a trio of subtle but highly effective branding exercises that appealed to both Hitta users and the GIA judges.

Casino Supplier of the Year: NetEnt

This award has almost become synonymous with NetEnt on account of the number of times its won it in the past. In 2018, the judging panel admitted that it might have been time to select a different software provider. However, when the facts were in, none could match NetEnt’s growth rate or development. Throughout the course of 2017, NetEnt signed deals with 21 new operators and managed to get 14 platforms live by the close of the year.

With the largest network of partners now at its disposal, NetEnt recorded another year of revenue growth in the last 12 months. The final reason this brand received the Casino Supplier of the Year trophy was its spiral innovation. Unlike slots released before it, Finn and the Swirly used a new “spiral” dynamic instead of traditional spinning reels to align its symbols.

Bingo Supplier of the Year: Playtech

The launch of new and exclusive games for operators such as Gala and Sky formed part of the reason Playtech received the Bingo Supplier of the Year award. However, in a sector that’s struggled to grow in recent years, Playtech’s desire to innovate through its omni-channel software has been inspired.

For the GIA panel, repurposing online bingo games such as Clover Rollover for use in the retail sector has helped drive the industry through a rough patch. By embracing consolidation and innovation in this way, Playtech was seen as the worthy winner in this category.

Poker Supplier of the Year: Playtech

As a poker provider, Playtech’s 2018 award has been built on two core achievements. In the first instance, the brand was able to forge cross-border links with Finland’s Veikkaus and Austria’s win2day. These partnerships have not only created new gaming opportunities in previously closed countries but broken the mould of what was previously thought possible.

On top of this, the launch of innovative CRM tools has allowed operators to better segment players and maintain a harmonious ecosystem. Instead of pushing our regular players in order to focus on newbies, Playtech’s software now allows for better targeting and optimisation, which is something the judges deemed worth of an award.

Responsible Gambling Operator of the Year: NO ONE

Perhaps the one surprise at this year’s ceremony was the lack of love for operators and their responsible gaming policies. While there weren’t any major security incidents in 2017, a number of operators were hit with fines for failing to protect the integrity of the industry. With brands such as 888 receiving large fines from the UKGC for oversights with regards to problem gambling, the judges felt improvements were needed across the board. Indeed, with pressure from the general public and regulators to be better, all operators will have to work harder than ever this year if they want to win GIA’s Responsible Gambling award in 2019.

Overall, 2017 proved to be another successful year for the iGaming industry. Although a few major players continued to dominate, a selection of smaller brands started to make their mark. Indeed, as the trend of convergence and consolidation continues, we’ll no doubt see more interesting innovations worthy of an award at the 2019 Gaming Intelligence Awards.