6 Online Gaming Developments To Watch For in 2018 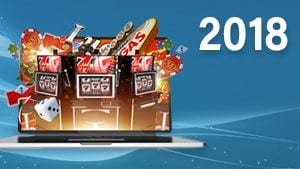 Governments and lawmakers around the world continue to take very different views of regulated online casino markets. It is hard to argue against the regulation introduced into the UK having been successful, both for the coffers of HM Inland Revenue through the point of consumption tax, and also for players if the increasing participation rates are anything to go by. Therefore, no significant changes in the current arrangements are expected (although see below on the laws regarding marketing).

However, in Portugal, another major European market, regulation hasn’t proven quite as successful or popular, largely due to the excessive rates of taxation that have been imposed, so let’s hope the UK government learns a lesson from this and doesn’t take online punters for granted in the forthcoming year in the way it does smokers and drinkers!

The story regarding the success or otherwise of regulation in the US is not as clear cut, but it can be argued that the fragmentary nature of the market is at least in some part responsible for this. With only four states currently offering online gambling, there is no national legislative framework and so the industry remains somewhat fractured and the direction going forward is unclear.

In Asia, the Philippines continues to be largest regulated market, where foreign operators are welcomed but are unable offer services to locals. However, they can do so for players outside of the Philippines, and so this provides operators with a base from which to penetrate lucrative Asian grey markets. Therefore, Philippines is likely to retain its pre-eminent position as a regulated gambling jurisdiction.

So, what does 2018 hold with regard to online gambling regulation elsewhere? There are still plenty of grey markets in developed countries and there are no signs of operators being in a hurry to get out of these (despite some questions about their sustainability), although if more governments choose to go down the regulatory route, then the decision will be taken out of the industry’s hands.

In the meantime, however, countries like Germany, Sweden, Netherlands, Australia, Japan, Mexico and Brazil remain grey markets (even if some are ‘greyer’ than others), although there is some prospect of change. The German Interstate Treaty on Gambling is set to come into force at the beginning of 2018, Netherlands and Sweden are well on the way towards regulated markets (possibly in 2019), while stuttering efforts to introduce regulatory frameworks in Brazil and Mexico are ongoing. 2018 therefore looks like it’s going to be a wait-and-see year…

Gamification has been one of the biggest buzzwords in the last year, and we can expect to see this trend continue. New developers like Quickspin, for instance, are keen to embrace the idea of including extra ‘missions’ and ‘achievements’ within their slot games, in recognition of the different gaming expectations of a younger generation of players. Operators too are increasingly embracing gamification as a way of updating and reinvigorating the conventional online casino loyalty programme, again with the needs of new, younger players in mind.

Greater personalisation of the online gaming offer is something else we can expect to see more of in 2018. Bonuses, rewards and specials individually tailored to reflect players’ preferences, rather than generic offers, are proving to be attractive and so after the first tentative steps in this direction, greater personalisation will likely become a standard feature at many online casinos.

That this is what punters want has been demonstrated by the success of various online sportsbooks’ introduction of bespoke markets and odds. All of the leading brands now have promotions in place whereby if they don’t have the market or bet you’re looking for, you can send them a direct message on social media (usually Twitter) and they will give you a price. At some online bookmakers, this offer is only available on selected markets, but at others they will give you a price on literally anything if you ask. This innovation has proven incredibly popular and is likely to become a bigger feature in 2018.

You would have to have been living under a rock in the last months of 2017 not to have been aware of the spectacular rise and rise in the value of Bitcoin, and to a lesser extent other cryptocurrencies. Debate continues to rage over whether Bitcoin really is the digital currency of the future or a bubble that is simply waiting to burst, but what is clear is that the online casino industry, always an early adopter, is getting in on the cryptocurrency boom — perhaps not wholeheartedly as of yet, but it is certainly in the game.

There are already a number of casinos that accept bitcoins as a payment method and then convert it into GBP or another currency for playing, but there are also sites where you can use bitcoins as your playing currency. If, or when, confidence in cryptocurrencies increases throughout 2018, it’s likely that more online casinos will adopt this operating model and allow you to play using bitcoins directly, which has the advantage of your bankroll not being subject to Bitcoin’s rather extreme volatility. We can also expect to see Bitcoin casinos making more of their Provably Fair games concept as well as a means of attracting players.

A number of UK online casinos were hit with heavy fines in 2017 by the Competitions & Markets Authority (CMA) for their use of language around promotional offers like ‘free spins’ and ‘free bets’, as well as for their terms and conditions being unclear and potentially misleading with regard to the withdrawal restrictions attached to Welcome Bonuses and other promotions.

The effect of this has already been seen, and will continue to have ramifications throughout 2018. Both operators themselves and their affiliates are now being much more explicit in their language when describing the T&Cs associated with casino signup offers and other bonuses, in particular making clear the conditions players have to fulfil in order to be able to withdraw both their own cash and bonus funds.

We have also seen some refreshing approaches to Welcome Bonuses being adopted. Bgo as an example, now have no wagering requirements on the ‘Fair Spins‘ you get as a Welcome Bonus. It’s hard to imagine, given the CMA’s heavy fines, that other online casinos won’t follow suit this year.

In the current Premier League season, 45% of teams are sponsored by online gambling companies. This figure is as high in the Championship, as well as in other major leagues across Europe. However, despite the fact that this number is actually lower than in the 2016/17 season when it was 50%, there is a something of a backlash taking place against online and land-based bookmakers’ prominent role in football sponsorship, fueled also in part by self-righteous public anger over FOBTs (fixed odds betting terminals).

The Labour party, for instance, is calling for betting companies to be banned from sponsoring football shirts as part of a wider push against gambling in general that is being promoted by campaign groups and sections of the media. With sponsorship deals worth £47.3 million for the Premiership clubs this season alone, this is not an arrangement that anyone is going to want to walk away from voluntarily, but the threat of compulsion is looming, and so we may well see gambling firms decide to stay ahead of the legislative game and look to spend their marketing cash elsewhere in 2018, leaving Premier League and other clubs poorer as a result.

Industry Mergers and Other Changes

As the value of the global gaming market continues to grow year on year (it’s estimated that it will reach USD$81 billion by 2022), the leading players continually jockey for position so as to get a bigger piece of the pie. Recent years have seen a number of major mergers and acquisitions in the online gambling industry, and we can expect to see more similar takeovers and mergers, like LeoVegas’ purchase of Royal Panda, going forward as well.

Acquiring an existing brand’s player base can be more cost-effective than trying to bring in new players from scratch, and so this is a strategy that we can expect to see more of, as brands seek to grow and elbow the smaller players out of the market. This is despite the fact that these mergers haven’t always been the success they were predicted to be e.g., Ladbrokes Coral, bwin.party, and Paddy Power Betfair.

We can also expect to see more diversification as the omni-channel approach becomes omni-present. For instance LeoVegas, who started out purely as an online casino, has successfully transitioned into sports betting as well. PokerStars, the site that drove the online poker boom, has in recent times expanded to offer online casino games and sports betting, and expects these soon to become the most profitable parts of the business. Most online bingo rooms now offer slots and other casino game alongside bingo, while almost all online bookmakers now have extensive casino offerings that in some cases overshadow their sports betting. The aim is increasingly for operators to provide everything under the one virtual roof, because as competition in the industry hots up, player retention becomes more vital to success.

Therefore, as well as more mergers, expect to see an increased emphasis on omni-channel gaming where a single log in and account will let you play slots and poker, bet on the Premier League and the grand National, and play bingo and live casino games all from the one account and with the one operator.