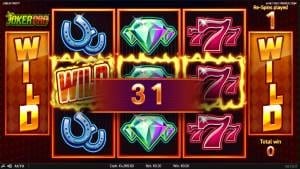 The New Year looks like it’s going to bring some exciting online slots and December’s releases look very enticing, with some great games from NetEnt, Betsafe and other big game developers. Let’s take a look at some of the best slot games released during the past month.

>> Play all the latest slots at one of our recommended online slots sites. We update our rankings on a daily basis to reflect all the latest changes in this dynamic industry. To see today’s Top 5 Online Slots Sites, click here. <<

The latest release from Net Entertainment brings us the Joker Pro slot. This joker-themed game has an energetic and vibrant feel to it and it delivers dazzling thrills on every spin without the need of fancy gimmicks and heaps of features. The slot has a Re-Spins Hot Spot feature where reels 1 and 5 become Wild with 3 Hot Spot positions on the 3 middle reels. There’s a top prize of 1000x the stake. Joker Pro is among the most volatile slot games to have been produced by NetEnt.

Microgaming have delivered another action-packed slot game boasting 40 paylines across 5 reels. This game is based on Edgar Rice Burroughs’s jungle hero character, obviously. It’s jam-packed with Stacked Wilds, Multipliers that can grab 18x your bet and a Bonus Wheel feature where players spin the wheel to trigger these Multipliers. The jackpot prize is 1000x the stake while a Pick-a-Potamus Bonus sees players select hippos to win cash prizes. Tarzan also has a ‘Free’ Spins round where you can steal up to 12 ‘Free’ Spins. There are also Rolling Reels and 15-high Growing Wild Stacks. It’ll be no surprise if this branded title from Microgaming proves to be a hit – there’s lots of fun and lots of win potential in this slot game!

>> Not sure which online casino is best for slots? Check out our Online Slots Showdown, where we pit three of our favourite sites against one another in a battle to crown the King of Slots Sites! <<

Legend of the Golden Monkey

The Legend of the Golden Monkey slot is powered by newcomers in the iGaming industry, Yggdrasil. This game developer has released some impressive games and they have really impressed with this slot. The Legend of the Golden Monkey is played both ways and is based on the old Chinese tale of the Monkey King. There is a handsome selection of rewards on the reels in this slot game. There are Sticky Wilds, Stacked Wilds, Instant Wins, Incremental Wilds and ‘Free’ Spins. There’s up to 250x the stake to win, with the Golden Dragon symbol acting as the Scatter to trigger the ‘Free’ Spins feature.

The Golden Jungle slot is the newest game from IGT. Set in the tropical jungles of Asia, this 50-payline slot features two-symbol high Wilds, locked Stacked Wilds and a bonus feature that offers up to 75 ‘Free’ Spins. The slot is a Wild Stays 4 Plays game, which means players can collect icons to turn reels Wild for the current spin and the three that follow. The sleek design and smooth gameplay make it a joy to spin too. There are payouts up to 2,000 coins if the right reels land with golden goblets, daggers, necklaces, treasure boxes and elephant statues, as well as a Maharajah’s turban populating the reels.

The entertaining Sin City Nights slot from gaming developer BetSoft is themed on Las Vegas, the home to casino gaming. This game brings the lights, glamour, funky sounds and thrills of Vegas to the reels. The cascading reels’ feature make it a lot of fun to spin while the Multipliers up to 15x your stake can offer big payouts. There are exploding icons that boost wins, and ‘Free’ Spins that are triggered by landing three of the ‘Free’ Spins icons. Any wins will prompt a Gamble feature where players have the opportunity to boost their wins. There’s a jackpot of up to 12,500 coins up for grabs on the Sin City Nights slot.