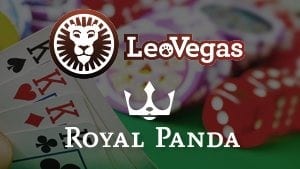 LeoVegas has moved to expand its mobile provisions and become a leading light in the industry thanks a recent partnership with Royal Panda. In a case of lions and pandas coming together in perfect harmony, the deal will see both brands retain their individual identities but share ideas, innovations and deals that should benefit players of all persuasions.

At the heart of the deal is a push to make mobile gaming the dominant asset at both LeoVegas and Royal Panda. According to reports, LeoVegas is putting up €60 million (£58 million) to complete the deal, but will hand over an additional €60 million (£52 million) if Royal Panda meets the following targets over the next 12 months:

For Royal Panda, the takeover will signal the latest phase of growth within the company. As well as offering desktop and mobile casino gaming, Royal Panda uses its own proprietary platform. Using this as a base, the brand recently added sportsbook provisions to its sites through a partnership with BetConstruct.

During the third quarter of 2017, Royal Panda saw its year-on-year takings increase by 61% to €9.8 million (£8.6 million) for an estimated profit of €3.2 million (£2.8 million). According to the balance sheet, almost 50% of that revenue came from the UK, while mobile betting accounted for approximately 66% of the company’s earnings.

This presence in both the UK and the mobile market is something LeoVegas will be looking to exploit in the coming years. Indeed, despite being a larger entity, just 12% of LeoVegas’s Q3 2017 earnings were generated in the UK.

Fresh Focus on a Thriving iGaming Market in the UK

The desire to focus on the UK comes off the back of the UKGC’s latest revenue report. Crunching the numbers for the period April 2016 to March 2017, the regulator found that online gambling increased its share of the industry’s total revenue. After becoming the largest assets in UK gambling between 2015 and 2016, online gaming revenue topped £4.7 billion during the latest accounting period. Helping contribute to a 10.1% gain was casino and sports betting. Thanks to a £1.6 billion contribution from slots, casinogross gambling yield (GGY) topped £2.6 billion. Alongside this figure, online sports betting raked in £1.9 billion.

By forging a deal with Royal Panda, LeoVegas will now have a greater presence in a burgeoning market. Moreover, the new opportunity will help LeoVegas offset the revenue it has lost after pulling out of the Australian market following recent regulatory changes. Commenting on the deal, LeoVegas CEO Gustaf Hagman said that was a “major” acquisition that will benefit both parties.

Partnerships Old and New to Give LeoVegas Added Strength

As news of the Royal Panda purchase was filtering through the industry, LeoVegas also announced a contract extension with the Kambi Group Plc. After agreeing a partnership with Kambi to offer sports betting back in 2016, LeoVegas agreed a multi-year extension at the close of October 2017. Although LeoVegas is still fairly green when it comes to sports betting, it is looking to increase its presence in the market with Kambi and Royal Panda.

“We are delighted to continue working with Kambi – it has been a great journey since the launch of LeoVegas Sportsand we believe we have more exciting times ahead. We really appreciate the support we’ve had from Kambi as we build and improve our unique sports betting experience. It makes a big difference for us that Kambi offers the most betting markets with all sports included,”

Consolidation is the Key to Success for Major iGaming Brands

Consolidation has been the buzz word in the iGaming industry for the last few years and the deal between LeoVegas and Royal Panda is clearly a move designed to keep both brands competitive. At this stage, neither operator has outlined what players can expect in the coming months. However, LeoVegas has stressed that mobile gaming will be a priority moving forward.

With both companies boasting a strong presence in the mobile market, we could will likely see more games and sports betting options added to both brand’s apps in the near future. Whether or not the two brands will eventually merge into a single platform remains to be scene. However, for the time being, the suits at LeoVegas HQ have insisted that they will remain separate and the deal will involve sharing knowledge, ideas and resources.